Higher Ground Landscaping offers a full line of services to help reduce your Detroit sewer bills by reducing the amount of water run off from your property into the Detroit sewer system. These include: French drains, drainage tiles, site grading and more.

The Detroit water, sewer and drainage rates are reviewed every spring and adjusted, if needed, every summer. The Detroit Board of Water Commissioners, in a public forum, reviews and approves the rates for Detroit residential and commercial customers.

Several factors are computed as part of the Detroit water and sewer rates.
They include:

Cost of noncollectable accounts from residents and businesses; and 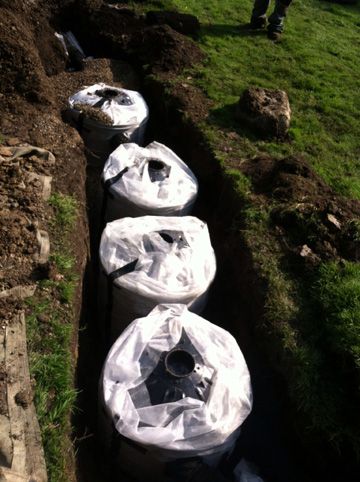 Detroit — The city’s Water and Sewerage Department in October will begin charging 22,000 parcel owners for about $10 million in drainage fees never before collected.

Detroit Water and Sewerage Department Director Gary Brown said Wednesday that the parcels are being added to the system as part of his department’s ongoing effort to bring fair and equitable billing to Detroit’s water customers.

The move is the first in a multiphase plan that will transition all parcels to a uniform system for drainage billing within the next several years.

Since 1975, Brown said, most customers have paid for drainage as part of their water and sewer bills. Some have been paying on an outdated fixed-rate meter system, while others are being charged based on impervious-acreage — a model that will be implemented when the transition period concludes. And the 22,000 others had not been charged at all.

“In order to get our goal accomplished of getting everyone on to the same billing system to bring fairness and equity to this system, the first thing we have to do is get everybody on the system,” Brown said in an interview with The Detroit News Editorial Board.

Last week, DWSD began sending out letters to the parcel owners who haven’t previously been charged to alert them of the impending fees. The city has the ability to seek up to six years worth of unpaid drainage fees, but said the new customers will not be back-billed for drainage services.

The parcels were identified based on assessing records and other survey data. Officials acknowledge the data might be off and they are making the notifications early to address potential issues and concerns, said Eric Rothstein, DWSD’s program director for the drainage charge program.

“The first thing to do is check that we’ve got the right information,” he said. “If we don’t, let’s make sure we get it correct.”

Among those being added to the drainage billing system are commercial, industrial, residential and tax-exempt parcels, including government properties and churches.

“All 22,000 (who haven’t paid) — no matter the classification — will have to pay in October,” said department CFO Marcus Hudson.

“We’re just going to make you pay the impervious charge from the onset and not phase you in over three years.”

Residents who have never paid a drainage bill will be charged at a rate of $750 per impervious acre per month, minus a 25 percent credit, Hudson said. Based on the average residential acreage, a residential customer will be paying $22.48 when the costs kick in Oct. 1, he said.

The program, officials said, will ensure all parcels that drain into the city’s sewer system are billed for their fair share of the city’s annual drainage costs based on impervious-acreage billing.

Included will be parcels not receiving a water bill, such as surface parking lots that drain into the sewer system. Impervious surfaces are roofs, sidewalks, driveways, parking lots and similar hard surfaces that prevent or limit the ability of storm water to soak into the ground.

Brown said he does anticipate some debate.

“You can imagine how many don’t have a water account and haven’t paid for this service before, how they are going to react,” he said.

DWSD officials noted Crain Communications Inc. is among the commercial properties that had been charged based on the meter system and will be affected by the shift to an impervious-acreage billing rate.

Eric Cedo, a spokesman for Crain’s, confirmed Wednesday that the company received notification from the city within the last week.

“We’re looking into the change and we’ll be working with the city on it,” he said.

Residents on the meter system currently pay $20.50 per month for drainage costs. They won’t be phased in to the new fee schedule until Jan. 1, 2018, Hudson added.

Hudson said residential customers won’t likely see an increase for the drainage costs by that time. As the department brings on more impervious acres, the annual cost is expected to go down, he said. The totals will go from $750 the first year to $650 the second year, and less than $600 after that.

Brown said officials are phasing in the changing drainage rate to mitigate the impact it will have on businesses and residents.

“If we tried to flip the switch and do it all at the same time, the cost to some commercial, industrial and residential would be unfair and not be able to budget for,” he said.

Hudson says it is critical that the proper drainage costs are applied. The department, he said, incurs more than $125 million a year in cost to transport, treat and store billions of gallons of contaminated stormwater and ice melt.

DWSD officials said the department has brought on a team of customer-service representatives to address inquiries about the new drainage charges.

Thanks for filling out form!

We are a landscape contractor that services Oakland Co. Michigan
and the surrounding areas.  Drainage, paver installation, and landscape design and installation.